Additionally, you will also need a Windows VM in order to configure the malicious Office documents.

Initial Access consists of techniques that use various entry vectors to gain their initial foothold within a network. Techniques used to gain a foothold include targeted spear-phishing and exploiting weaknesses on public-facing web servers. Footholds gained through initial access may allow for continued access, like valid accounts and use of external remote services, or may be limited use due to changing passwords. 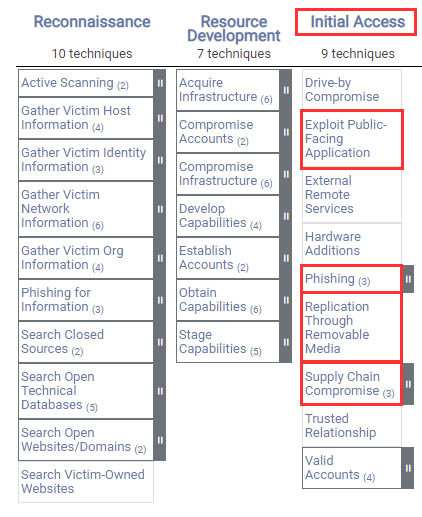 The techniques outlined under the Initial Access tactic provide us with a clear and methodical way of obtaining an initial foothold on the target system, however, as you may have noticed, some techniques such as “Trusted Relationship” will require physical contact with employees and the target organization. In this case, given the nature of our engagement, we will only be focusing on digital initial access vectors such as phishing.

In this case, we will be utilizing the Phishing technique to obtain an initial foothold on the target network.

Adversaries may send phishing messages to gain access to victim systems. All forms of phishing are electronically delivered by social engineering. Phishing can be targeted, known as spear phishing. In spear phishing, a specific individual, company, or industry will be targeted by the adversary. More generally, adversaries can conduct non-targeted phishing, such as in mass malware spam campaigns.

Our objective is to generate a malicious office document that contains a macro that will provide us with a reverse shell on the target system when executed.

The following diagram outlines our attack methodology and the various steps involved in the process.

The attack methodology can be broken down into the following procedures:

The following diagram illustrates the various operating systems we will use and their requirements.

In order to generate our malicious macro document, we will need a Windows VM with the following programs and configurations:

We will be setting up Powershell Empire as our C2 server on a Kali Linux VM for ease of use, alternatively, you can also set up Empire on a  Linux server in the cloud.

Given that we are utilizing Phishing as our initial access vector, the target much meet the following requirements in order for the attack to work as intended:

Now that you have an idea of our infrastructure, we can begin the process by taking a look at how to install and configure Empire.

Empire is a pure PowerShell post-exploitation framework built on cryptological-secure communications and flexible architecture. Empire implements the ability to run PowerShell agents without needing powershell.exe, rapidly deployable post-exploitation modules ranging from keyloggers to Mimikatz, and adaptable communications to evade network detection, all wrapped up in a usability-focused framework.

PowerShell Empire recently received an update and is now officially support and maintained by Kali Linux, more information regarding the update can be found here: https://www.kali.org/blog/empire-starkiller/

In addition to being updated and modernized, BC Security, the company responsible for maintaining the Empire has also developed a companion to Empire called Starkiller. Starkiller is a Frontend for the Powershell Empire. It is an Electron application written in VueJS and provides users with an intuitive way of interacting with Empire.

In order to get an understanding of how Empire works and the components that make up the framework, I would recommend going through the official documentation which can be found here: https://www.powershellempire.com/?page_id=100

Now that you have an idea of what Empire is and what it is used for, we can take a look at how it can be installed on Kali Linux.

PowerShell Empire and Starkiller can be installed on Kali Linux by following the procedures outlined below:

Update your repositories and packages, this can be done by running the following command:

The next step will involve installing PowerShell Empire and Starkiller, this can be done by running the following command:

After installing PowerShell Empire and Starkiller, you can start up the Empire server by running the following command:

This will start up the server and will set up the Empire Restful API on port 1337 as shown in the screenshot below. 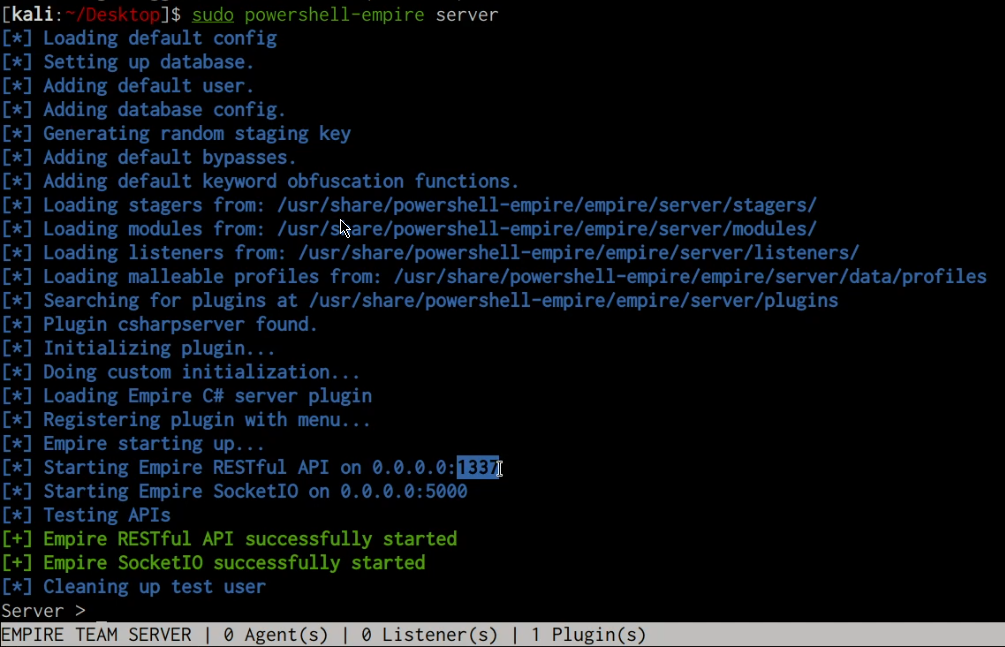 Once the Empire server is up and running, you can connect to the server through the Empire client by running the following command:

You can also startup Starkiller UI by searching for it as illustrated in the following screenshot.

During the first launch, Starkiller will prompt you to authenticate with the Empire server. The default access credentials are empireadmin/password123

Once logged in, you should see a similar interface to the one shown in the screenshot below. 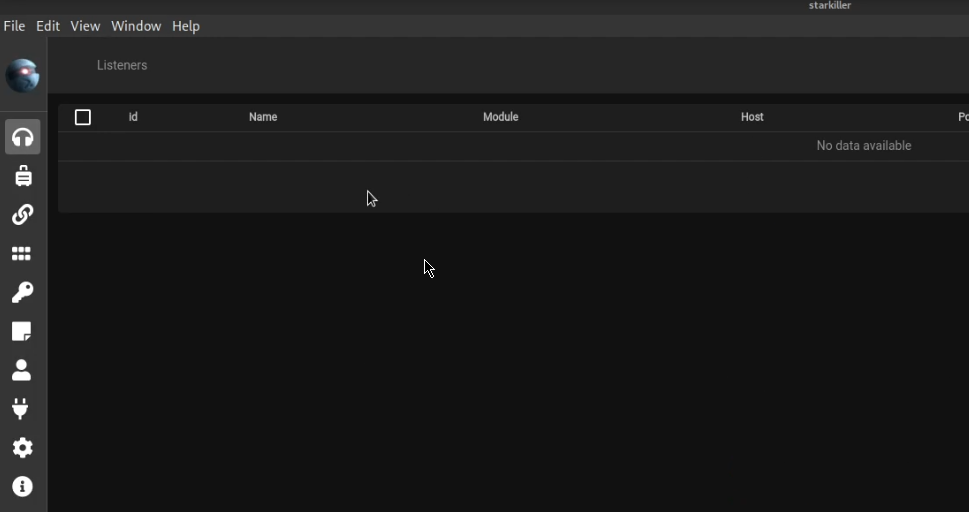 Now that we have set up PowerShell Empire as our C2 server, we can take a look at how to set up Luckystrike on our Windows VM.

Luckystrike is a PowerShell-based macro generator for malicious .xls and .doc documents Luckystrike provides you with several infection methods designed to get your payloads to execute without tripping AV.

Before installing Luckystrike, you will need to launch a PowerShell prompt as administrator.

Configure PowerShell to allow the execution of PowerShell scripts, this can be done by running the following command in PowerShell with administrative privileges:

The next step is to download Luckystrike to your Desktop, this can be done by running the following PowerShell command on your Desktop:

This will download all the Luckystrike PowerShell scripts and files onto your Desktop.

The next step is to execute the luckystrike.ps1 script in a PowerShell prompt with administrative privileges. This can be done by running the following command: 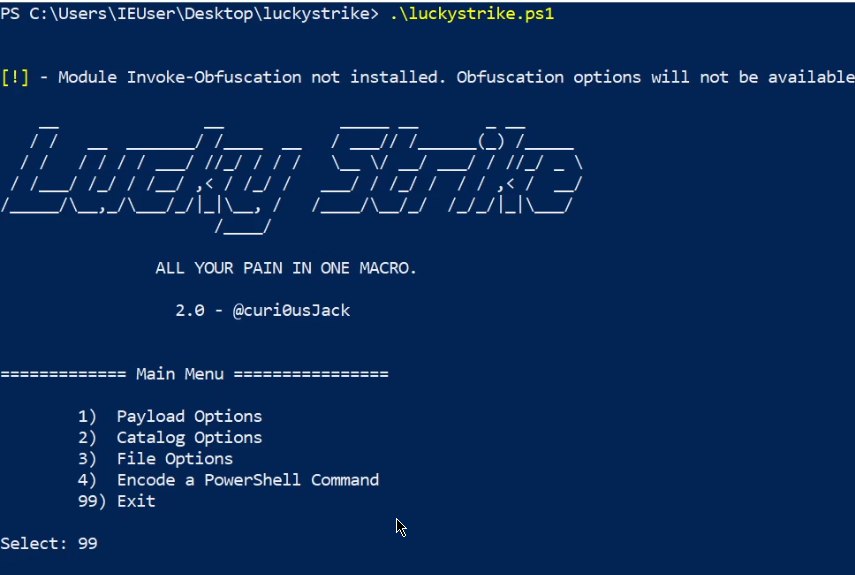 You should be greeted with a screen similar to the one shown in the preceding screenshot.

To learn more about how Luckystrike works, refer to the official Wiki: https://github.com/curi0usJack/luckystrike/wiki

Now that we have Luckystrike setup, we will need to set up our Empire listener and stager.

We will need to set up an Empire listener in order to receive the reverse connection from the target system, additionally, we will also need to generate a stager with Empire that will be used to generate our malicious macro document.

The first step is to set up a listener, in this case, we will set up an HTTP listener with Star killer, this can be done by navigating to the listener page and clicking on “create”. 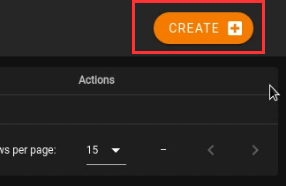 You will now need to specify the listener options, ensure that you specify your Kali IP in the host field as shown in the screenshot below. 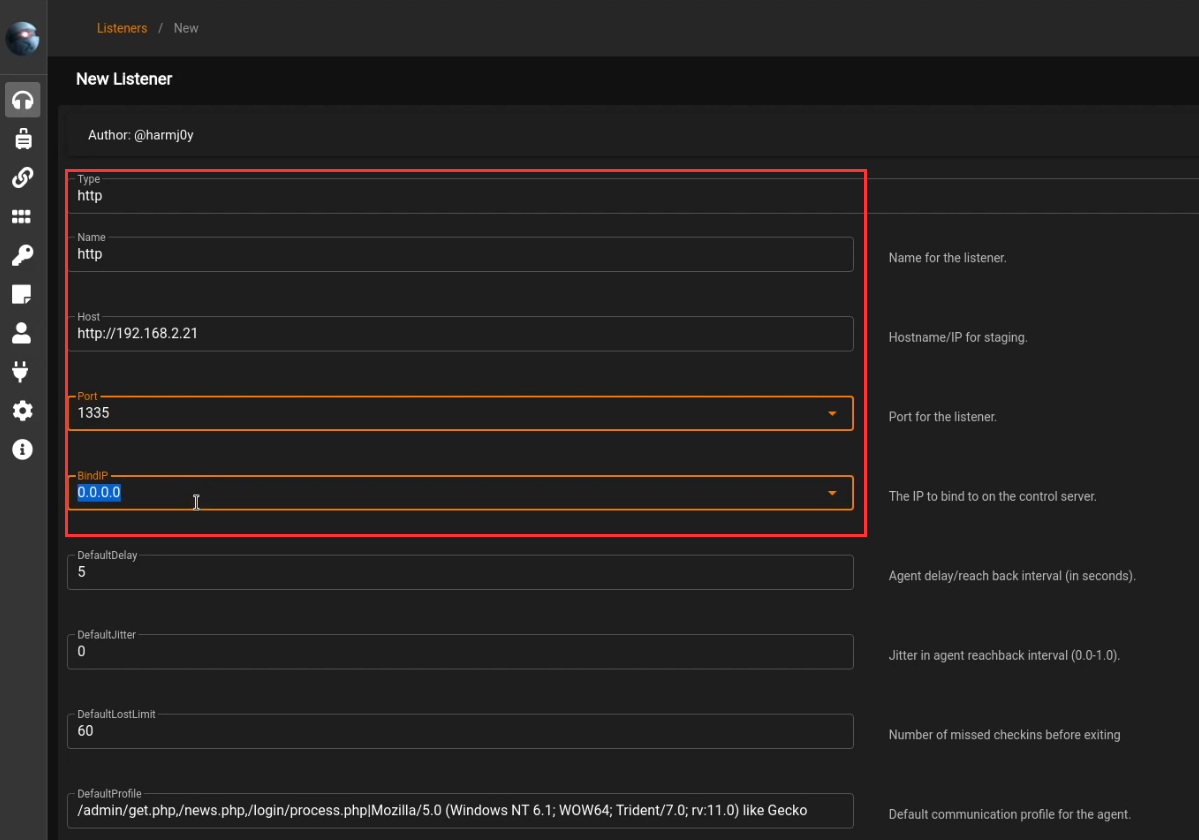 After setting up the listener, we will need to setup the stager, however, before we do that we will need to start the csharp server that will be used to compile the stager. This can be done by expanding the sidebar and clicking on plugins. After which you will need to click on the csharp plugin and start it as shown in the screenshot below. 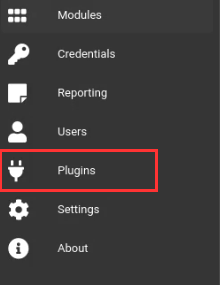 The next step will be to set up our stager, this can be done by expanding the sidebar and clicking on the stagers menu item. After which, you will need to specify the windows/csharp_exe stager as highlighted in the screenshot below.

Ensure that you specify the listener we created in the Listener field, additionally, you can also customize the OutFile field for the executable.

After creating the stager, you can download it by clicking on the menu button on the stager as highlighted in the screenshot below. 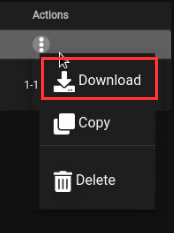 After downloading the stager, you will need to transfer it to the Windows VM so that we can utilize it in the generation of our malicious document with Luckystrike.

After transferring over the stager from the Kali VM to the Windows VM, we can begin the process of generating the malicious macro document with Luckystrike.

The first step involves running the luckystrike.ps1 script in a PowerShell prompt with administrative privileges. This can be done by running the following command:

The next step is to add a payload to the catalog, this can be done by selecting option 2 as highlighted in the following screenshot. 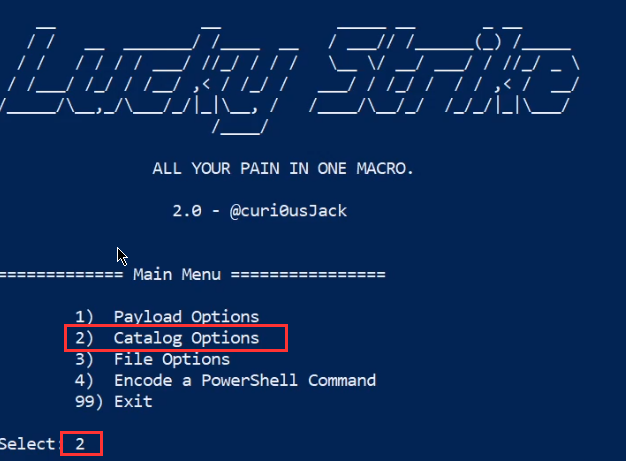 We will now need to add a payload to the catalog, this can be done by selecting option 1 as highlighted in the following screenshot. 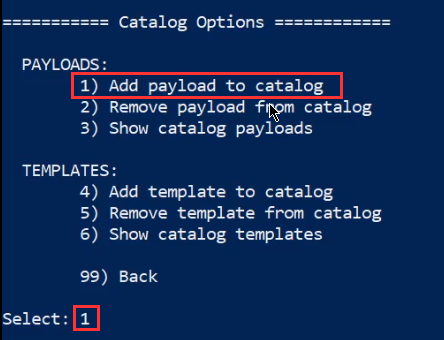 You will now need to specify a name for the payload and provide any relevant information pertinent to the payload as highlighted in the following screenshot.

The next step is to choose a payload type, in our case, our stager is an executable so we will select option 3 as highlighted in the following screenshot. 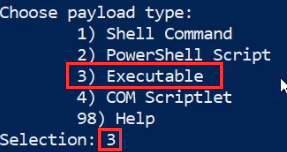 You will now need to specify the path to the Empire stager we created as highlighted in the following screenshot.

The payload should now be added to the Luckystrike catalog, you will now need to select the payload. This can be done by navigating back to the Luckytrike main menu and selecting option 1 as highlighted in the following screenshot.

You can select the payload we created earlier by clicking on the “Select a payload” menu option and selecting the “Empire stager” payload we added to the catalog as highlighted in the following screenshot. 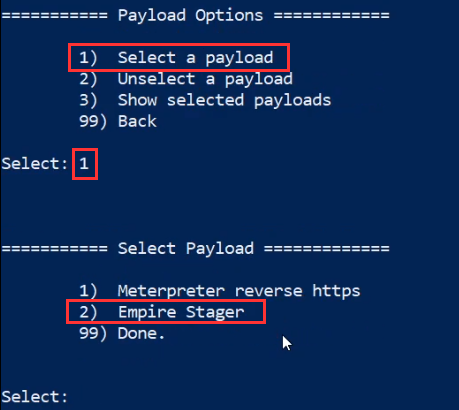 You will now be prompted to specify an infection method, in this case, we will be utilizing the “Certutil” method as highlighted in the following screenshot.

The certutil infection method will utilize the inbuilt Windows utility “certutil” to download the payload onto the target system.

The infection methods refer to the various techniques that can be utilized to download the payload onto the target system.

We can now generate the malicious document by navigating back to the Luckystrike main menu and selecting the “File Options” menu option as highlighted in the following screenshot.

The next step will involve generating a new file, this can be done by selecting the “Generate new file” menu option as highlighted in the following screenshot.

Your malicious macro document will be saved in the Luckystrike directory under the payloads folder, the next step will involve sending over the file to the target via a phishing email.

Once the target opens the document and runs the malicious macro, we should receive an agent on the Empire server and client as well as Starkiller.

Now that we have obtained an initial foothold on the target system, we can begin exploring the process of setting up persistence.