As a penetration tester, you will be spending most of your time working in the Linux terminal, as a result, it is vitally important to know how to set up your terminal to be as efficient as possible so as to improve your efficiency and workflow.

In this case, we will be taking a look at how to set up your terminal for use during penetration tests and other engagements, this process will involve the use of various terminal emulators, multiplexers, ZSH, and several plugins that will provide you with useful aliases that will speed up and improve your efficiency.

Tools we will be using

The techniques and tools outlined and used in this post were performed on Kali Linux. With the exception of package managers and package names, the techniques are applicable to all Linux distributions regardless of their use case.

The first step will involve setting up our terminal of choice, in this case, we will be utilizing Terminator, Terminator offers great functionality and customization as opposed to other terminal emulators.

You can install Terminator on Linux by running the following command:

After installing Terminator, you should familiarise yourself with the keybindings and customize the look and feel of your terminal.

One of the great features of Terminator is the ability to split your terminal either horizontally or vertically, this can be done by right-clicking on your terminal and specifying the type of split you want.

Alternatively, you can also split your terminal by utilizing the following keybindings: 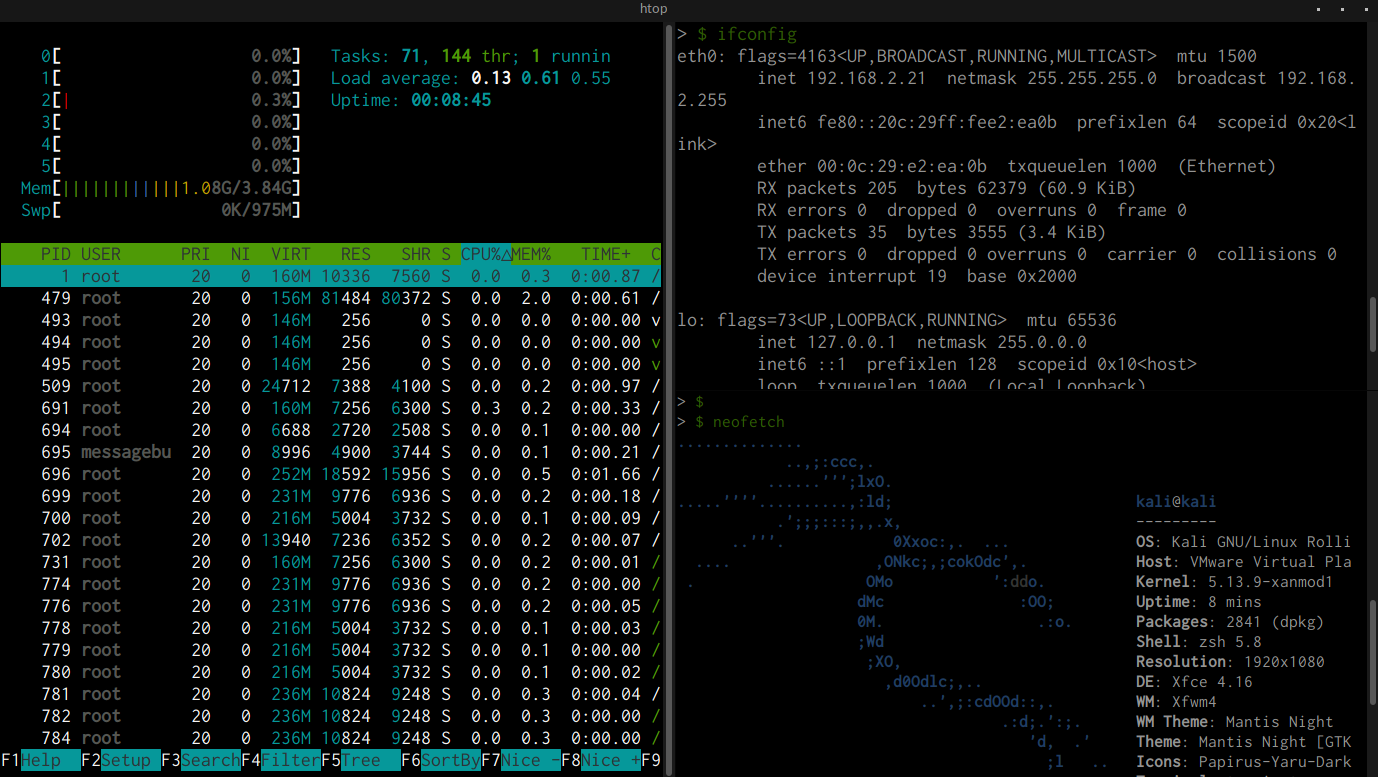 As shown in the preceding screenshot, you will now be able to split your terminal both vertically and horizontally, consequently improving your efficiency.

Note: Splitting your terminal is not the same as opening a new terminal tab.

tmux is a terminal multiplexer for Unix-like operating systems and allows multiple terminal sessions to be opened and accessed simultaneously in a single window. It can be used to run more than one command-line program at the same time.

You can install tmux on Linux by running the following command:

After installing tmux, you can launch it by running the following command in your terminal:

You can launch a new session through the use of the following keybinding:

You can switch to other terminal sessions by utilizing the following keybinding:

You can learn more about how to use tmux in the following video tutorial we published.

The Z shell is a Unix shell that can be used as an interactive login shell and as a command interpreter for shell scripting.

The reason we are utilizing ZSH is primarily because it offers vastly more in terms of functionality, aliases, and plugins as opposed to other shells.

By default, Kali Linux and other Linux distributions utilize BASH as the shell of choice, in order to switch from BASH to ZSH, you will need to install ZSH. This can be done by running the following command:

After installing ZSH, you will need to switch the default shell for your current user, this can be done by using the chsh (Change Shell) utility as follows:

This will prompt you to specify the new shell for your current user, in this case, you will need to specify /usr/bin/zsh as shown in the following screenshot.

After specifying ZSH as your default shell, you will need to reboot your system for the changes to be applied.

The next step will involve setting up oh my zsh to manage and theme ZSH.

Setting up and configuring oh-my-zsh

Oh My Zsh is an open-source, community-driven framework for managing your Zsh configuration. It comes bundled with thousands of helpful functions, helpers, plugins, and themes.

We will be using oh my zsh to set up our shell prompt, install useful pentesting plugins and improve our efficiency.

You can install oh-my-zsh by running the following command in your terminal:

This will install and set up the oh my zsh framework on your system. After it has been installed, you can modify your ZSH configuration file stored in your user’s home directory:

This configuration file allows you to specify your theme, plugins, or any aliases you wish to add.

You can select the oh-my-zsh theme you want to use from the following repository: https://github.com/ohmyzsh/ohmyzsh/wiki/Themes

After selecting a theme, you can specify the name of the theme in the ZSH configuration file as shown in the following screenshot.

You can select the oh-my-zsh plugins you want to use from the following repository: https://github.com/ohmyzsh/ohmyzsh/wiki/Plugins

After selecting the plugin you wish to install, run the plugin installation command for oh-my-zsh and specify the name of the plugin in the ZSH configuration file as shown in the following screenshot.

Oh my zsh also provides you with the ability to create command aliases to improve your efficiency, this can be done by adding your aliases to the ZSH configuration file as shown in the following screenshot.

In addition to the useful plugins that you can set up and use with oh-my-zsh, there are various helpful plugins that can improve your efficiency during a penetration test or security engagement.

The following is a list of plugins that use on a regular basis:

This plugin adds some useful aliases for Nmap similar to the profiles in zenmap.

Installation instructions for the plugin are highlighted in the companion video for this post.

To use it, add nmap to the plugins array in your zshrc file:

The following is a list of aliases that this plugin provides:

You can use the aliases provided by this plugin to improve your efficiency when running Nmap scans.

This plugin provides aliases and functions for the lazy penetration tester.

This plugin can be installed by running the following command in your terminal:

After installing the plugin, you will need to add zsh-pentest to the plugins array in your .zshrc file:

Quiver is an organized namespace of shell functions that pre-fill commands in your terminal so that you can ditch your reliance on notes, copying, pasting, editing, copying, and pasting again. Quiver helps you remember how to use every tool in your arsenal and doesn’t hide them behind scripting that can be cumbersome to maintain or update. Instead, you can use Quiver to build a composable, on-the-fly workflow for every situation.

Quiver has the following requirements:

You can install the quiver plugin by running the following command:

Edit ~/.zshrc to load the plugin.

Every namespace was a qq–install command that will install all of the tools relevant to that namespace. You can install just the tools you need, or use qq-install-all to run the installers of all namespaces.

Quiver is meant to provide a composable, on-the-fly workflow. It replaces the common painful raw workflow of reading your notes, finding a command, copy, paste, replace the values with target values, copy, paste, run. Some rely heavily on completely automated scripts or frameworks that run all the commands for a workflow and output well-formatted data. While these scripts are great for many use cases, they can often be brittle, hide the underlying tools and techniques, and be cumbersome to modify. Instead, Quiver gives you a happy medium, you can run commands quickly and easily with well-organized output, composing your workflow as you go depending on the targets and context.

The usage instructions for this plugin have been covered in the companion video to this blog post.